Our business is built on essentials. What we mine and sell—aggregates—are indispensable to infrastructure and growth. How we run our company also comes down to essentials. We run our business with great discipline and integrity. We maintain a great place to work and grow. We take care of the land through the entire cycle of productive use from mining to restoration and re-use. We serve our customers and communities well. Always with the long view in mind. This is how we sustain success.

We are Vulcan. And we deliver value. 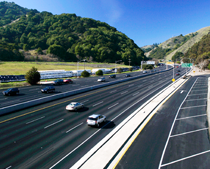 Our coast-to-coast footprint and strategic distribution network align with and serve the nation's growth centers.

Vulcan Materials Company is the nation’s largest producer of construction aggregates—primarily crushed stone, sand and gravel—and a major producer of aggregates-based construction materials including asphalt and ready-mixed concrete. Our coast-to-coast footprint and strategic distribution network align with and serve the nation’s growth centers. We are headquartered in Birmingham, Alabama.

Vulcan has over 400* active aggregates facilities, and 70 asphalt facilities and 240 concrete facilities, which also consume aggregates. All are located in the U.S. except for our two large quarries and marine terminals on Vancouver Island in British Columbia, Canada, and Mexico’s Yucatán Peninsula. The products from this facility are primarily exported by ship to the U.S. Gulf Coast, where quality stone cannot be mined locally.

What we produce is used in nearly all forms of construction. In particular, large quantities of aggregates are used to build and repair valuable infrastructure such as roads, bridges, waterworks and ports, and to construct buildings both residential and nonresidential, such as manufacturing facilities, office buildings, schools, hospitals and churches.

* Updated after the acquisition of U.S. Concrete